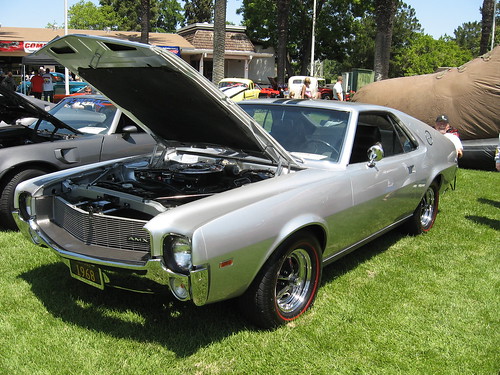 If you have looked at our project AMX, this is close to what it should look like when completed!

American Motors Corporation (AMC) was an economy car company. It built good practical cars. They had innovations like reclining seats and small efficient but boxy bodies. Unfortunately the mid 60s was a time of youth. Youth that wanted speed and flash not boring economy cars. It was the hip generation. AMC was late to the party but they came dressed to make an impression.

For the average motorist in 1968 it was no big deal but for the car enthusiast the arrival of the newest American two seat sports car was a major event. AMC introduced the AMX in 1968. Here was some real competition for the Corvette for substantially less money.

The design was unique and to many, beautiful. With its long hood and abrupt rear deck – total car length, 177.2 inches it looked powerful, and was. A wide-track stance comparable to much larger cars, placed on a tight 97-inch wheelbase, was basis for extraordinary road stability.

It had all those mechanical and equipment features you would expect in a true sports car design. Within that design were: powerful engines (V-8’s only) with dual exhausts; special suspension (including rear traction bars) with high-performance tires; floor mounted, four-speed transmission; integral tachometer and a lot more. For example: reclining slim-sectioned bucket seats; carpeted storage area behind the seats; a trunk of nearly 10 cubic feet, with a space-saver collapsible spare tire; and a capacious 19-gallon gasoline tank.On top of these were other features absent in most sports cars. Among them: hefty, deep sectioned bumpers; flow-through fresh air ventilation; large, frame less side windows without vent windows; and smooth contoured outside door handles.In keeping with its character of a “no-compromise” car, AMX offered a full range of options and equipment for that personalized tailoring which was common for the day.Standard under the hood was a 290-cubic inch, 225-hp Typhoon V-8. From there it was a step up to the 343cube, 280-hp version. Then came the “AMX 390” V-8, which puts out a thundering 315 horsepower (in 1968). This was good for zero to 60 in less than seven seconds.An over-the- top racing stripe went with two different performance “Go” packages. The first package started with the “343” V-8 and included power disc brakes, red-line wide profile tires, higher-rate heavy-duty front and rear springs, specially calibrated heavy-duty front and rear shock absorbers, Twin-Grip differential, and heavy duty engine cooling system. The “AMX Go” package has the same equipment, but included the “390” V-8 as a base.Additional accessories like a stereo tape player (8 track) certainly did add a great deal to the personal mood of an AMX. 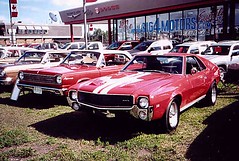 The new “390” V-8 was introduced with the 1968 AMX. This engine came with the highest-rated power output ever attained by a standard production American Motors engine – 315 horsepower, 425 foot-pounds torque. The thin-cast design brought total engine weight under 600 pounds. Boasting such heavy-duty components as forged steel crankshaft and connecting rods (instead of the usual cast iron) the “AMX 390” V-8 reflected an American Motors engineering objective of extreme reliability as well as power.

Even before it was introduced to the public at the Chicago Auto Show on February 23, 1968, the AMX broke 106 National and International speed records with Craig Breedlove behind the wheel. Breedlove would take the AMX to Bonneville and run an official 189 mph with an unofficial run of over 200 mph.

On the streets the competition was finding that the little company from Kenosha had an underdog that would bite. Straight line was fine but when run hard through the corners the AMX really came alive! Mechanix Illustrated tested the car and had this to say: “In summing up, the AMX is the hottest thing to ever come out of Wisconsin and I forgot to tell you they have it suspended so that you can whip through corners and real hard bends better than with many out-and-out sports cars”.

To go along with the performance of the car AMC offered a number of luxury items. Air conditioning, automatic transmission, tilt steering, power steering or quick-ratio manual steering, AM, AM-FM or AM 8 track stereo, tinted windows, remote outside mirror and power disc brakes were on the list with many other options. Reclining bucket seats were standard.

The AMX was the only American steel bodied two seater of its time, the last being the ’55-’57 Ford Thunderbird. The starting factory price for a 1968 AMX was $3,245.00, nearly $1,500.00 less than a Corvette. Hitting the show rooms in March of ’68 resulted in only 6,725 AMXs being built, but the company’s larger goal for the AMX was met, to bring younger customers into AMC showrooms and to show that AMC was finally serious about performance.

1969 was a year of continued success for the AMX, on the track and in the showroom. The exterior of the car remained the same, the interior was updated with a larger tach, 140 mph speedometer, headrests, slightly different door panels and center console (for automatic cars only), a Hurst shifter on the 4-speeds, a passenger grab handle, and a few other upgrades. New options were added; leather seats could be ordered for the interior and 12 new exterior colors were available. In the spring, the Big Bad Colors were introduced for the AMX, these three bright racy colors were real attention getters.

AMC and Hurst teamed up and in the fall of 1969 fifty-two consecutive numbered AMXs were pulled from the Kenosha assembly line. These 390 4-speed cars were then shipped to Hurst facilities in Michigan where they were modified for NHRA Super Stock racing.

In the summer of 1969 the AMX was the official pace car for the Pikes Peak Hill Climb. Ten to twelve AMXs, all Frost White with red stripes and red interiors, were used as courtesy cars by select participants of the race. Only one of these cars is known to still exist and is documented as being used by Bobby Unser during the week prior to the race.
The total production for the 1969 AMX was 8,293 (this included the 52 S/S AMXs). This was the highest single year production of the three years the two-seater was made.

If you would like to read more about the AMX you might want to try this article by Hemmings.