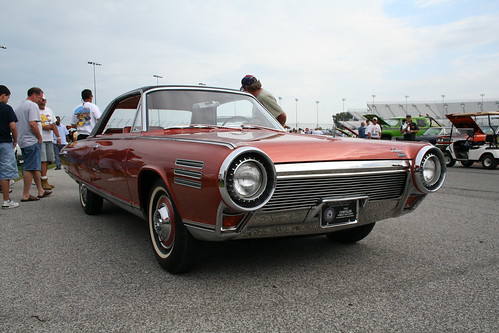 I fell in love with this car when I was in high school and it was just hitting the road. It was the Chrysler Turbine Car! It was like a Detroit Dream Car for the road and Chrysler gave them out to regular folks to drive for a few months! WOW!

Living in rural Iowa I never thought I would ever see the car in person. There were lots of photos and even some model cars but I wanted to see the real thing. I never did. I never did that is until just recently. Katrina and I were driving back from a lap around the track at the Monster Mopar Weekend in St. Louis and my eyes about popped out of my head; there it was.

Katrina had told me that there was some wild looking car driving around while I was cleaning up our car for the judges but unfortunately I shrugged it off as her spotting some old Valiant. When she said there it is again. I was driving; I slammed on the brakes, grabbed the camera and asked her to park the car!

I had only minutes because it was on its way back to the Museum of Transportation but I made the most of it. I was not disappointed in the least. I still have my reservations about the rear end styling. It is over the top. If the rear fenders and taillights were more like a 61 thru 63 Thunderbird the car would be perfect.

To see more on the Chrysler Turbine Car go to our Feature Car page and check it out.