We finally got the restoration of our 1967 Mustang Fastback back on the road but not in time for the 2011 cruise season. This took a lot longer than planned but also turned out better than expected. It was a long and drawn out process because we kept it road worthy during every phase of the restoration. Someday this will get a “tear it down and rebuild it restoration”. But for now it will get a lot of miles put on it and was a true low budget project. I would estimated we have invested less than $2,500 to get this car back to this level including tires and wheels!

These two photos are from around 1990 when I first purchased the car. It was my daily driver for awhile but during the next ten years each of my three kids drove it to high school and each left their own mark on it. The damaged right rear fender was the last straw and it went into storage until 2009 when we pulled it out for filming of the Gloriana music video. 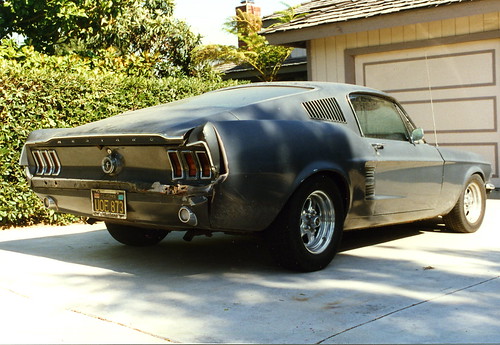 The first job to that was tackled was the repair of some previous rear end collision damage. My son was rear ended a long time ago and indecision on my part about what to do to the car left it in limbo until now. I was first going to turn it into a Shelby 350 clone but I had done that with a 66 and found it disappointing. All it did was make me want a real one.

The next thought was to do an Eleanor clone. However, I really like the simple and clean body of the stock 67/68 fastbacks and didn’t want to spend a bunch of money just to detract from the original lines.

Next up was a 428 CJ transplant to replace the 289. This scheme almost made it into reality but I decided that with the high price of gas coupled with my intentions to drive this car a lot I should just keep the 289.

For a long time I was not 100% sure what the final out come would be but I decided that what I wanted was a cool car that could be driven, enjoyed and repaired and fixed for cheap, just like when I was in high school. So it was decided to make the 67 into a High School Hauler just like a high school kid might have done the car back in the 80s. There is no big expenditure on chrome or fancy interior or flashy paint. It is easy to drive but respectfully fast and has character. I love it!

The first step was to pull the rear quarter into place and then replace the tail light panel and go from there. The original plan was to straighten the existing sheet metal but after tearing into it new metal was ordered.

To follow the progress check out our Phased reports on these updates.

Phase 5: Back on the Road