This is the same car with Benny Parson behind the wheel back-in-the day!

As configured here, it replicates the 1969 Benny Parson’s Talladega. It was the very first Talladega under official timing at Daytona in February 1969 and hit over 185 MPH.

This car was later reskinned to become Wendell Scott’s number 34 as both a 69 and 70 Torino.

We photographed this car at the Monster Mopar Weekend in St. Louis during the 2008 event. Certain Fords were allowed to participate as part of the Winged Car (Daytona and Superbird Club activities).

The is not pristine with immaculate paint and body but it is beautiful. The 427 sounds terrific (watch the video and listen for yourself) and the pure rawness of the race car makes you quiver. Unlike today, the race cars were not massaged to a silky smooth finish. When they started a race they often carried the scars of the previous race. You have to remember that in those days there were a lot more races and some of the drivers would compete in multiple events during a weekend. There was no time to do minor body work and repaint. These were race cars and not show cars.

I don’t think that any one at the show that weekend had more fun than the owner of this car and his son. I never saw them without a smile on their faces and when they pulled out of the show are, father driving and son sitting in the passenger window, race car style, I had to envy them for their ability to own such a treasure.

How is that for a race seat?

See the rear shock mount and the seal around the hole in the floor? Looks like a gear shift boot to me! 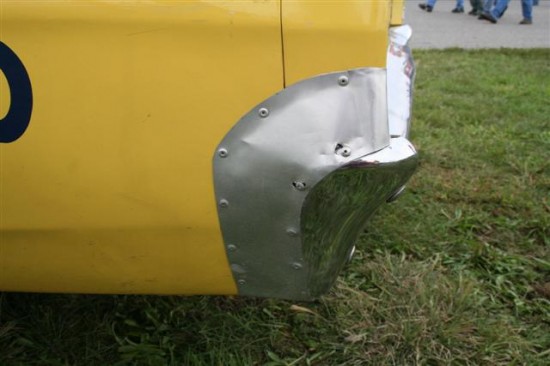 Aerodynamics was beginning to become a reality.

The beginning of today’s window nets!