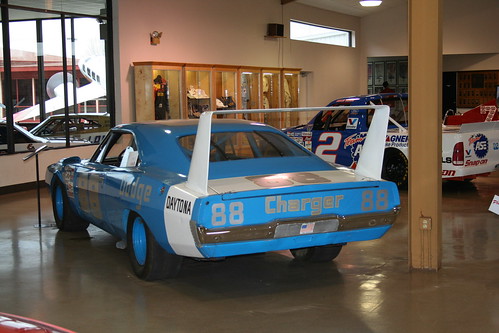 My wife and I decided to go On Tour for a day in the ZO6. It is an easy 4 hour cruise to the Talladega Speedway from our home. We jumped on the interstate, set the cruise control and a way we went. It was a warm Southern December day but overcast. We had heard of the International Motor Sports Hall of Fame but did not know what to expect. The travel guides we have research suggested we should allocate an hour for the tour. We spent four hours there! It was so much more than we had expected. There is even a library there which is a must see and if you are lucky Miss Betty Carlan, the Research Librarian the the First Lady of NASCAR, will be there to fill you with terrific stories of Back in the Day. We heard stories of the late great Dale Earnhardt, JR, David Pearson, Cale Yarborough and the stories went on.

The cars were far better than we imagined. Most are not show pieces, they are in unrestored or user quality. They look like RACE CARS not show cars. Just the way we like them! Katrina and I were like two little kids. We were scampering about getting so excited about what was next in line we couldn’t enjoy what we were looking at. We ended up going though the entire exhibit and then going through it a second time with a little more reserve.

Here are some examples, but put this on your list as a must see if you are a NASCAR fan who wants to know more about your sports history and the Legends that made it. You will also see what stock cars that race are suppose to look like!

While you are there you can buy your tickets for the next big race, we did.

Katrina makes it to Victory Lane! I’ve always known she was a winner!

Two of my personal favorites on the track; Bobby and Davey Allison. When we lost Davey it hurt as much as when Dale was called home.

Being an Iowa boy I had to include this photo of our own Tiny Lund, a Daytona 500 winner.

Speaking of the Daytona 500, this car actually raced on the beach at Daytona in 1947. What I would give to have been able to watch racing on the beach. I love dirt track ovals, can you imagine racing on the sand with the ocean as a back drop?

We talk about the TEAMS in NASCAR today; well what about the Junior Johnson Team of Darrel Waltrip and Neil Bonnett?

This was before Danica Patrick, Louise went racing in NASCAR.

Fireball Roberts was one of the Legends that brought fans to racing. This Smokey Yunic car was a Legend in its own right. Sterling Moss and Fireball were a couple of the first real race heroes I ever had. I can still remember, as a very young race fan, picking up the newspaper and reading that Fireball died from burns resulting from a wreck. Soon after a lot of my race attention was focused on the Indy 500. As some of you may remember, the 60’s and 70’s were very deadly years for drivers in Indy Cars. Since the loss of Dale Senior it seems safety has improved significantly for the drivers. However, let’s not forget the price paid by all the Legends that came before today’s heroes.

Bobby Allison, another member of the famous Alabama Gang.

BACK TO ON TOUR