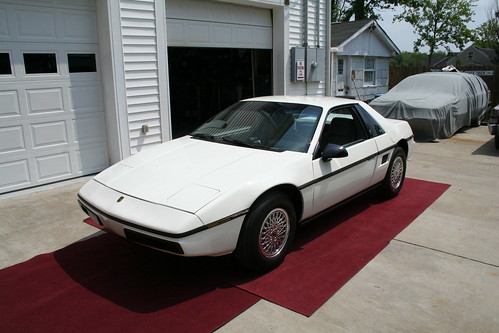 (Note: We have recently added some additional publications from Popular Mechanics and others at the bottom of this page.)

Our Feature Cars are generally some exotic or exquisite examples of top Classic Cars this example is not one of those. It is unique and very important to the hobby, but it will never stand out in a parking lot. The difference is under the hood and in its history. It is a Smokey Yunick Research and Development Hot Vapor Fiero. Smokey spent decades working on the Hot Vapor Engine. It has been tested by many, including Hot Rod Magazine; it has been called a fake; some say that it doesn’t exist and it has been called the solution to all of our high gas prices. You can do your own research on the Internet and in books and reach your own conclusions. (To read more about Smokey Yunick on our site Click Here.)

Hot Rod Magazine has done at least two articles on this car and both can be found reproduced here at the bottom of this page. The most recent was in the September 2010 publication.

Since this original web site post was published, the Smokey Yunick Fiero has moved to the Don Garlits Drag Racing and Car Museum in Ocala Florida. If you are in the area, stop in and see it for yourself. 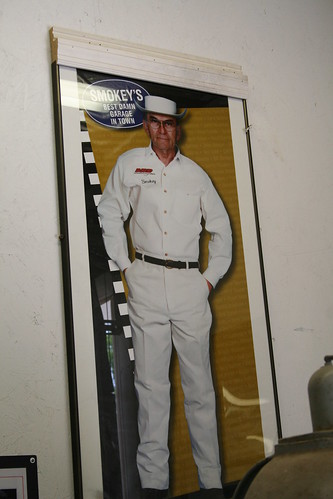 This life size photo of Smokey Yunick watches over Tony as he works his own mechanical magic. 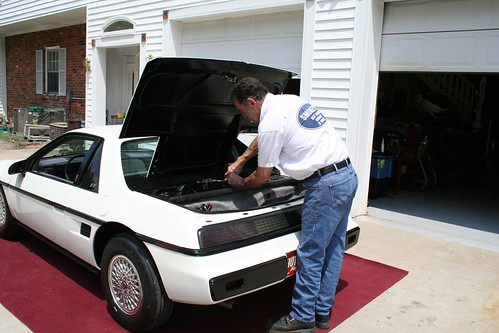 This is car owner Tony Allers tweaking on the Fiero.

I am not a mechanic or a genius. Smokey Yunick, in my mind, was both. It is a fact that he held many US Patents and gave NASCAR fits with his interpretation of the rules. He is a Legend in Motor Sports and we need a few more like him today. He invented “thinking outside the box” and being successful. He had no formal education past the 10th grade but taught many a college grad a thing or two about engines and aerodynamics and other things. 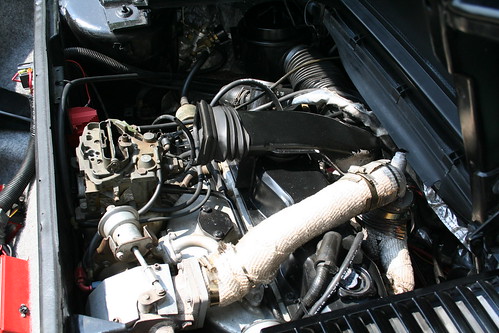 I urge you to do your own research on Smokey if you are not familiar with him. I never met him but Tony Allers, the man who owns this Fiero was a friend, acquaintance and customer of Smokey’s.

After spending a few hours with Tony Allers, I know they won’t be the last. Like Smokey, he is a very interesting individual and his garage is a small shrine or museum to Smokey. Having been an acquaintance of Smokey’s family, he not only owns the experimental Fiero but also some of the fixtures and old stock from Smokey’s Best Damn Garage in Town as well as a few motors and other artifacts. (Click Here to Check Out Tony, His Garage and New Projects) 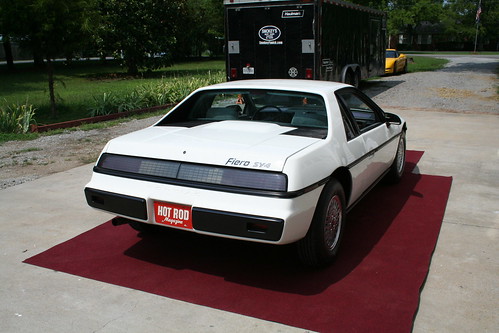 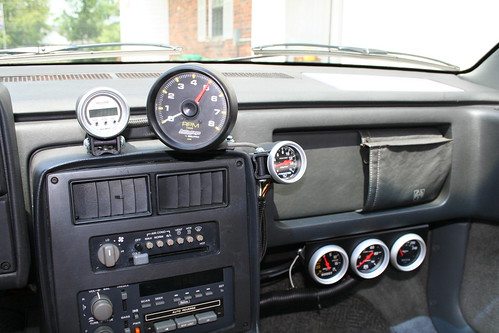 Only modifications to the interior are the additional gauges.

The car is uneventful in its appearance. It’s an early Fiero and white. You would walk by it in any parking lot or car show and not give it a second note. It is spotless with a terrific paint job and some strange tires, but nothing to make you stop. Even with the engine bay exposed you know something is different, maybe a turbo, but nothing spectacular. Start it up and it sounds like a strong little four banger. As they say, the proof is in the details and Tony Allers has the details.

Watch out Corvettes, this Fiero has the Smokey Yunick touch.

There is way too much to this story to tell in even this extended coverage, but I will try to give you an accurate overview as reported by Hot Rod in June 1984 by C. J. Baker. 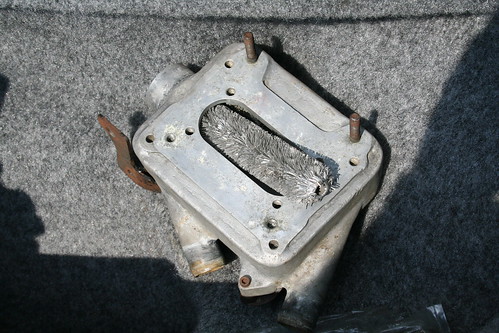 This is the Homogenizer. 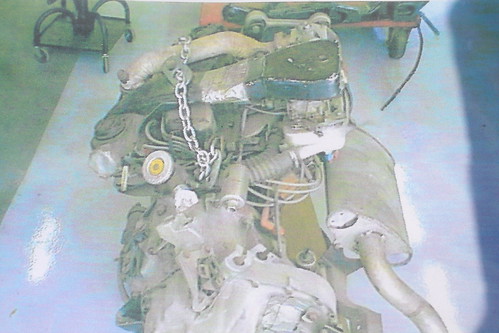 This is what the Fiero’s engine looked like when Allers got it.

If you would like to read more about Smokey Check this out:

As most of us believe, making the fuel cold increases density and improves performance. Cooler air and cooler fuel means more air and more fuel into the combustion chamber; bigger bang. That’s why our cars run so well in the spring and fall with that cool, crisp air. Smokey went a different direction. He believed that the quality of the mixture was more important than the quantity. Most engines of the day burnt only 25% of the fuel and wasted 75%. 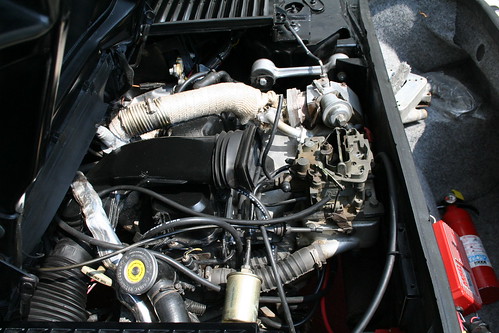 Smokey’s premise was, heat the fuel to 400-440 degrees and you could vaporize the gas more efficiently and get more power from less fuel. He designed a new cam; a homogenizer (exhaust driven turbine) to mix the air and fuel and a new intake manifold that is totally wrapped by exhaust gas ducting (to heat the mixture). The system is more complicated than my brief description, but you can see in the diagram how it works. I have also included excerpts from the Hot Rod Magazine article as follows. 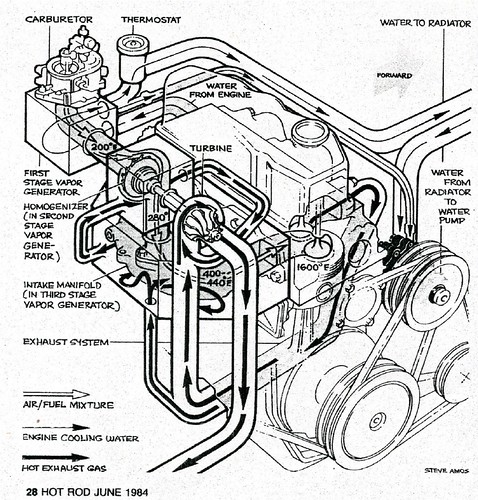 The following are excerpts from the Hot Rod Article to further explain the technical details of Smokey’s Hot Vapor Engine.

“…consider the Pontiac Fiero shown here. Equipped with Smokey’s “expander-cycle” exhaust and induction system, and requiring only a cam change inside the production 151-cubic-inch (2.5 liter) Iron Duke 4-cylinder, the car now gets more than 50 miles to the gallon, develops 250 hp and 230 ft.-lbs. of torque, runs more smoothly than any 4-cylinder you’ve ever experienced, starts and idles smoothly and cleanly, has no computer controls, passes federal emissions standards, an oh yes, it’ll accelerate from 0-60 mph in as little as 6 seconds flat! Here’s how it works.”

“Some parts of gasoline vaporize easily at low temperatures to help get a cold engine started. Other parts have a much higher boiling point to prevent the fuel from vaporizing in the fuel lines en route to the engine. What this all comes down to is that in today’s typical engines, only part of the fuel entering the combustion chambers is in a combustible state. To fully vaporize pump gasoline, and to keep it vaporized for complete combustion, the incoming air/fuel mixture needs to be elevated to between 400-440 degrees F.”

“First, all the hot water existing the engine is channeled through a heat exchanger directly under the carburetor (or throttle body injection, TBI, unit).”  (Next the mixture flows through what looks like a small turbocharger, but this is not a turbocharged engine. The turbocharger-like device is actually a homogenizer and the second-stage vapor generator. In the homogenizer an exhaust-driven turbine drives what appears to be a rotary compressor totally wrapped with exhaust gas ducting. The homogenizer serves to mix the incoming air and fuel into one uniform, homogenous mixture with the surrounding exhaust gases further elevate the mixture temperature to about 285 degrees F. From there the mixture flows through an intake manifold that is totally wrapped by exhaust gas ducting, elevating the mixture temperature to the desired 400-440 degrees F in this third, final stage. The fuel is now fully vaporized and distributed uniformly in a truly homogenous mixture that will burn cleanly and evenly in the combustion chambers without detonation or severe pressure spikes in the cylinders.”

“…all traditional internal combustion engines are dealing with non-homogenous, incompletely vaporized mixtures today. It is also true that the heating of the incoming mixture reduces its density and causes it to expand. On a normally-aspirated engine, such expansion would just push right back out through the carburetor, but on Smokey’s system the expansion is trapped in the induction system because the small turbocharger (homogenizer) serves as a one-way check valve. Consequently, with the expansion contained, the induction system becomes pressurized, providing high mixture density and artificially aspirating the engine.”

“There is a lot of physics and chemistry involved, and a few of the details contained in the various patents on this design have been intentionally withheld by the Smoke,…”

A copy of the entire article is also provided below if you are interested and your eyes can withstand the poor quality of the copy.

According to Hot Rod (their tests, not Smokey’s) the Fiero 151 cubic-inch 4 cylinder engine now produces 250 hp and 230 ft.-lbs of torque. They report it gets more than 50 mpg and will do 0-60 in less than 6 seconds with no emissions. 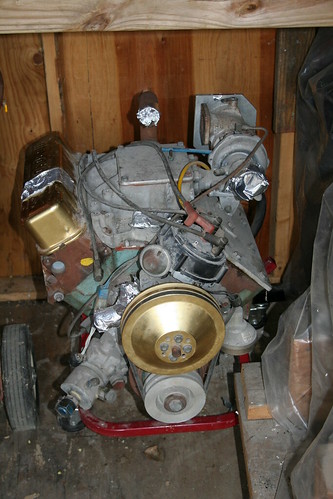 The technology was tested on 3 cylinder engines to 454 V8s with equal success. The calculations are 1.8 hp per cubic inch of displacement. Your 302 would produce 630 hp; a 350 equals 720 hp and that big 454 would kick out 817 hp! All this and it has a mild idle and is completely street able.

Tony hopes to build a new version for his big block Avalanche by the first of the year and get 25 mpg or better towing his show car! Now that will be sweet! Go to his page to see more. 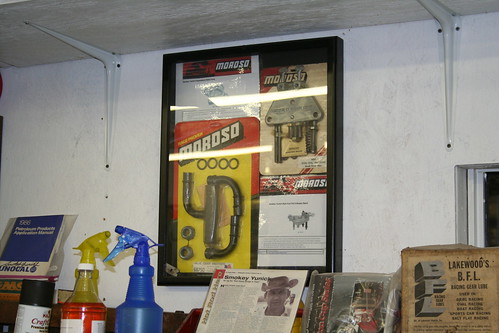 Some of the Moroso parts with Smokey Patents.

Remember I said the Fiero had a strange set of tires? Well, Smokey was an expert on all things car. He designed what he liked to call the “Bald Eagle” tire for Good Year. It is a slick with groves in it to make it work on the street in everyday conditions. It also has a special compound to reduce deterioration from ultra-violet light rays. There were only 100 of these experimental tires ever produced and 4 are on this Fiero and 2 are in Tony’s storage bay just because something might happens to one of the others. 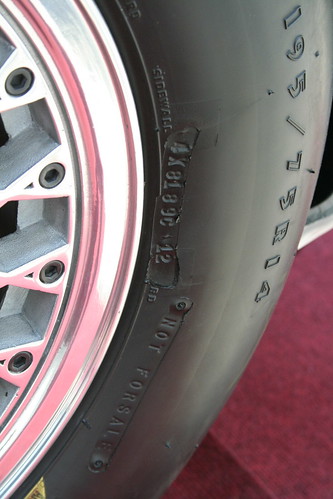 Look closely on the side wall of the tire and you will see and X in the serial number for experimental and “Not For Sale” stamped on the side.

What do I think? I think the Hot Vapor Engine is real.

Why didn’t GM, Chrysler, Ford or Toyota build it? Big business makes decisions by committee and doesn’t like to take chances; it moves slow.

Why doesn’t Edelbrock, Year One or Jack Rousch or some other independent jump in and make crate motors or conversion kits? I would love to give one of these a try. If I could double the horsepower and mileage on my muscle car, I would be on it in a heart beat. Can you imagine over 700 Horse Power and 30 MPG or better from your 350 powered Corvette or Camaro?

Maybe it is just another urban legend, but how do you explain the results of all the tests conducted by independent testers? Just maybe the reason GM, Ford and Chrysler are doing so poorly in today’s marketplace is because of poor decisions they have made in the past, maybe not pursuing the Hot Vapor Engine was one of those poor decisions.

If you would like to do some more research on your own you might want to begin the Smokey Yunick site at: http://www.smokeyyunick.com/ or if you want to know what someone else thinks, take a look at what Banks Power | Cool Air Equals Power has to say about Smokey’s invention. 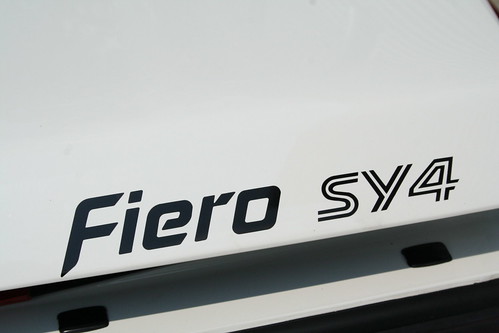 The SY4 is only found on this car; it stands for Smokey Yunick 4 Cylinder.

Now for the video!

The following is a copy of the original Smokey Yunick Hot Vapor Engine article in Hot Rod Magazine article that appeared in the June 1984 publication. 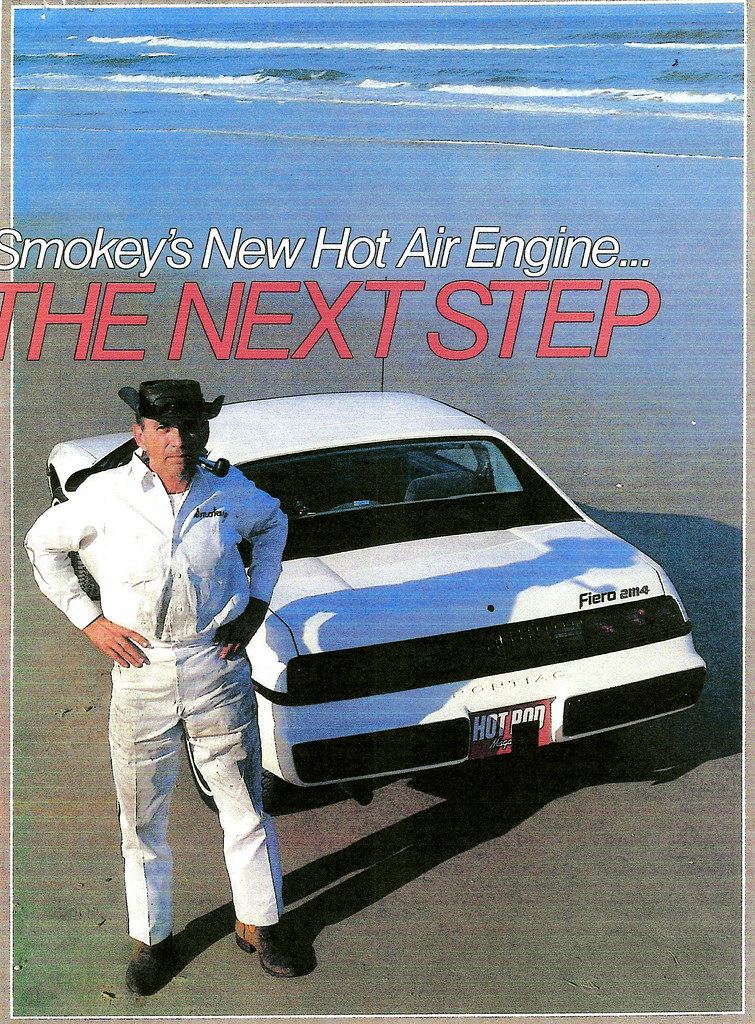 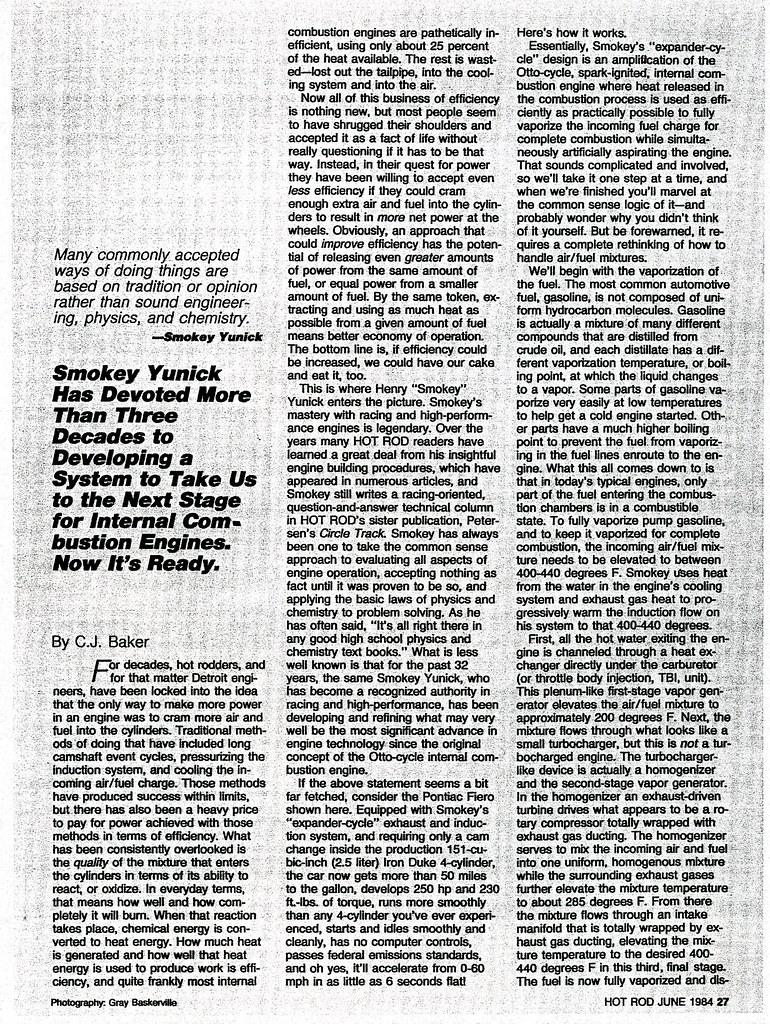 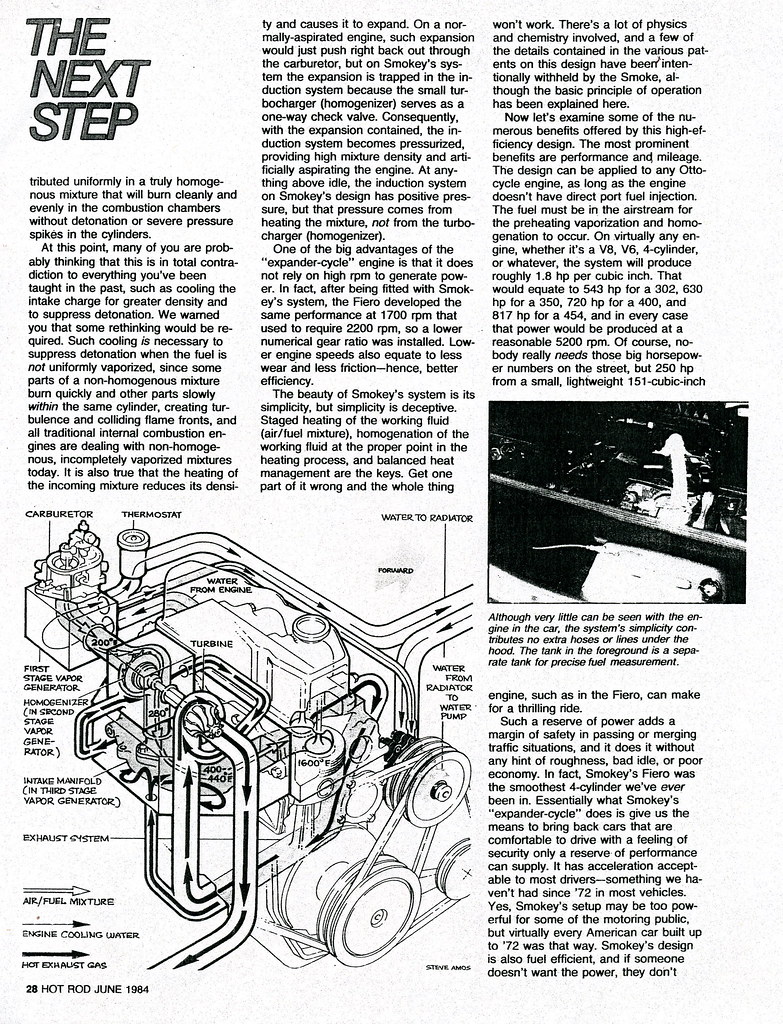 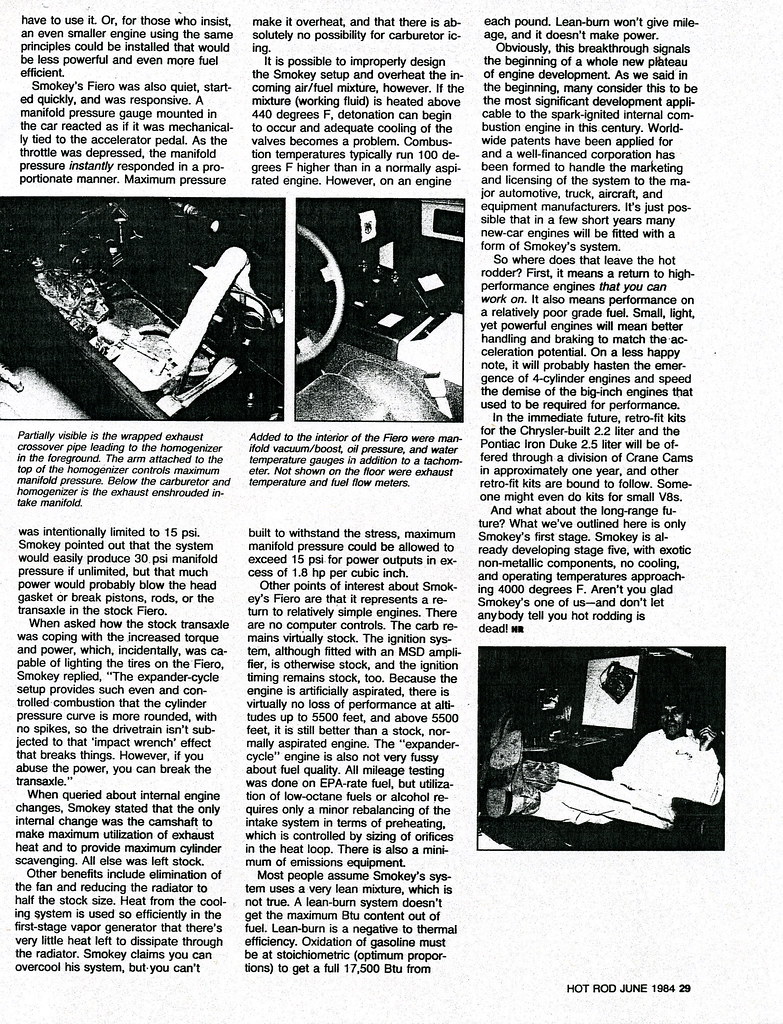 The following is a copy of the second Smokey Yunick Hot Vapor Engine Article that was published by Hot Rod Magazine in September of 2010.

This is a copy of one of the Patents for the Hot Vapor Engine. 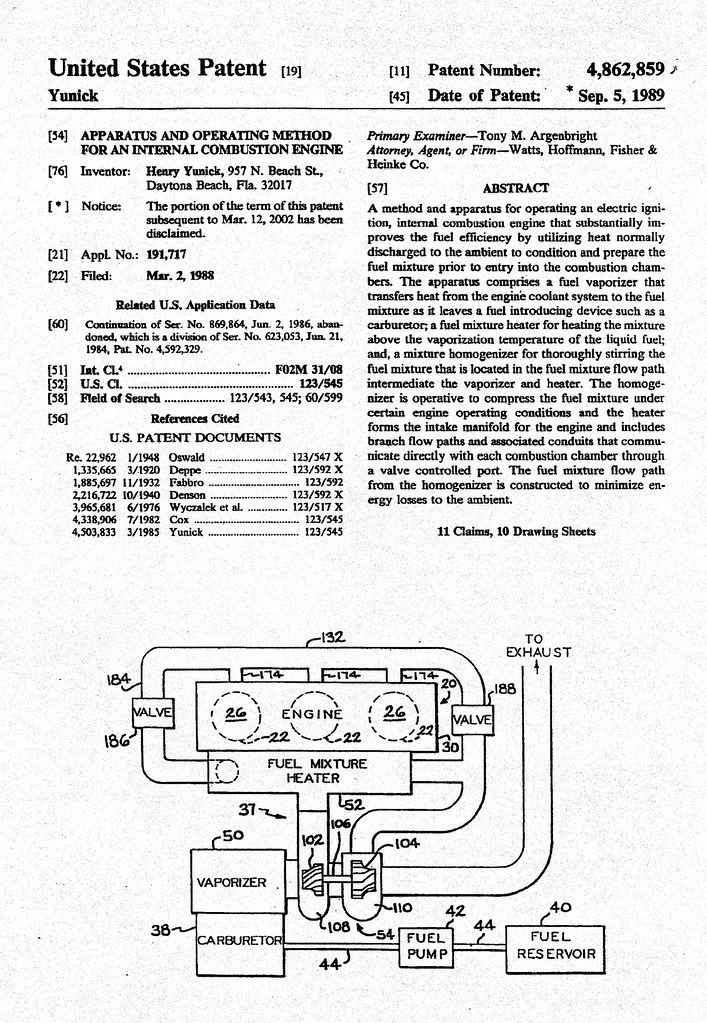 We would like to thank Tom Beeman for suppling these articles.

If you have trouble reading these try clicking on the image and then clicking on it again; it should increase in size and be easier to read.

IF YOU DOUBT SMOKEY AND STILL DO NOT BELIEVE THEN GO READ THIS ARTICLE ON THE BANKS WEB SITE, CLICK HERE.