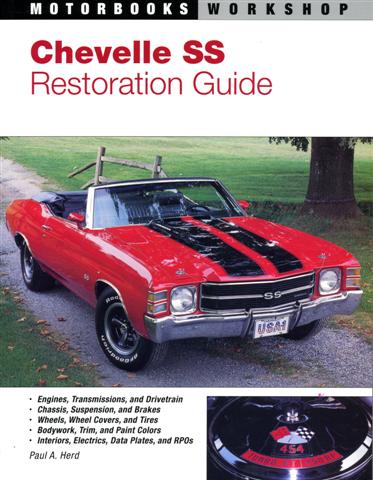 This is a workshop book from Motorbooks and authored by Paul A. Herd.

Appendix B: Production According to Powerplant

This book was first published in 1992. It is likely that some new information has been obtained since that time but what is found in this book is thorough. Do not be fooled by the title of the first chapter or those of the appendixes, this book will not decode your car for you nor tell you how rare it is. You need other resources for that data. It will tell and show you were to look for the various data plates but that is pretty much it. However, it isn’t called a decoder book, it is a restoration guide.

You will get few clues on how to restore your Chevelle in this book but you will get a wealth of parts numbers and other parts codes numbers. Although there are pictures and diagrams throughout the book and for the most part they are of a higher quality than found in many such books they are not all that great. Worst of all they are all in black and white.

I found myself looking at small photos of engines  with captions like “The 360 hp version of the 396 motor was called the L34 version….” and another photo with “As in earlier years, the king of the powerplants for the Chevelle SS in 1968 was the 396 ci/375 hp powerhouse….” The two photos were identical and right next to each other! Other photos in the book were so similar that I felt like I was in elementary school looking at a Weekly Reader trying to find the differences between to cartoon pictures.

This kind of guide will not help very much with a restoration. The restorer must have color and detail, and it better be right. 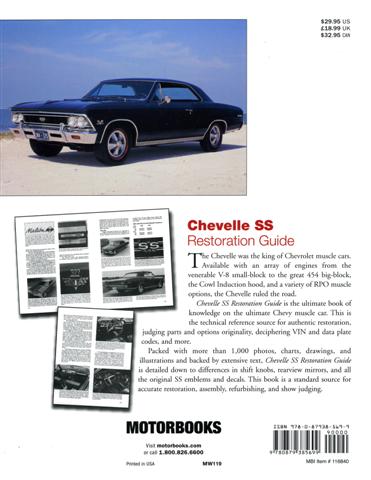 I have never restored a Chevelle and I am sure there is information in this book that many will find very useful. With that being said, I still wish I had this kind of information for some of the cars I am working. For a Chevrolet Chevelle there should be something much more complete and with much better photos available.

Maybe it is time for the author to update this book. There are a lot more people into restoring and enjoying Chevelles today than there were in 1992.