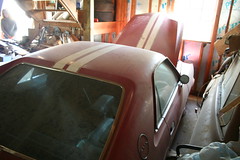 We have added a new Project AMX to our garage. It replaces the previous car which has since been sold to a new owner who will be completing it. We had the opportunity to pick up an excellent Barn Find but had to move one of our Project Cars out to make room for the new AMX. Since an AMX was moving in we thought it best to move an AMX out. The following is an overview of this new Project.

Muscle Cars were never meant to be museum quality art work; they are cars, and they were intended to be driven and driven hard on the street or the race track. When a new Muscle Car was purchased back in the day very few people went home with the goal of preserving the chalk marks on the firewall or keeping the total lifetime mileage under 5,000. Maybe those are the cars that bring big money at the Barrett Jackson Auction in Scottsdale but the cars that were driven and modified are the ones that brought big smiles to their owners then and still do today.

Most asked question: What’s an AMX?

This AMX was born as a very desirable and rare 343 cubic inch Go Pack car with 4 Speed, air conditioning and Group 15 option package. The original owner sold the car a few months after purchasing it because, as we were told the story, his Government called him to serve in Vietnam. When the second owner purchased the AMX it was a fast and desirable car, but not fast enough. The new owner soon purchased a period correct replacement 390 cubic inch engine and performance engine parts from the factory engineered, dealer available Group 19 package. This package included improved heads, aluminum Edelbrock intake manifold (with AMC part number), exhaust headers, Holly carburetor, high performance cam and modified air cleaner. Other options available from the dealer but not purchased for this car included: side exhaust pipes, roller rockers, various rear gears as well as 4 wheel disk brakes. The second owner installed the Group 19 goodies on the 343 engine. The 390 sat in the corner waiting for its turn. By 1981 the AMX had performed well but it was time for the 390. The car was pulled into the barn and the initial engine removal was begun but never completed.

A few years after purchasing the car the new owner also repainted the AMX from its factory white with blue stripe paint scheme to his preferred red with white stripe scheme. If you want to learn more about AMX cars in general, Click Here. 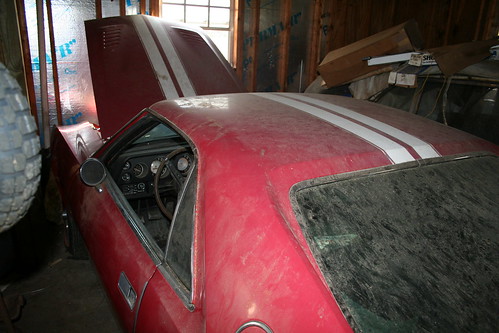 After a fun decade of regular use in 1981 this AMX was put to bed in an Alabama barn with approximately 62,000 miles on the odometer. It sat in this location until I, the third owner, purchased the car. This is my first true Barn Find and it was an exciting experience. I will tell you more of the find later but for now, it was taken to its new home with 28 years of dust on the interior and exterior but in rust free and very solid condition.

It was now time to begin a new chapter in this car’s life.

In 1969 I went down to the local AMC dealer and filled out an order form for my dream AMX. Unfortunately, a check was never attached and the order was never placed due to an Army based uncertain future. What was my dream? A red with white stripe 390 Go Pack car with 4-speed, air conditioning, redline tires, dealer installed Group 19 performance items plus a set of American Torque Thrust wheels. In essence the car you see here.

Some people want to go back and find their first car, I have always wanted to own the first car I lusted after but couldn’t have. Now I do! It isn’t factory original but it is better and it is just like that dream car I would have ordered and modified in 1969! This AMX will not be put back factory original, it will not be nut and bolt correct but it will be built the way I want it and the way you saw muscle cars on the street in 1969. And; believe me, this car is going to see a lot of street time!

As I was doing the first inspection of the AMX and was cleaning the interior I was excited about all the things I am planning to do with this new ride and all the great places it is going to take me. However, I also began to wonder where that original owner is today? Did he make it back from Vietnam? Does he own an AMX today? 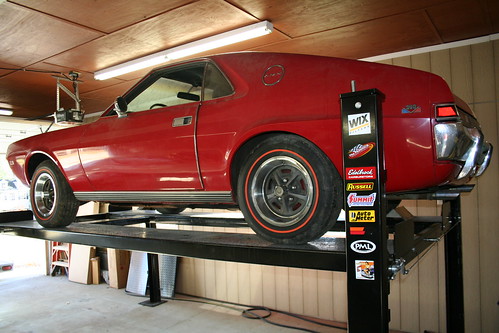 It is being readied for use in 2010 with only mechanical maintenance and upgrades to make it safe for road use. (We might even wash the 28 year old dirt off of it!)

YOU CAN TRACK ITS RESTORATION PROGRESS BY CLICKING HERE.