We have a 1967 Mustang fastback with factory air, 289 and C4 automatic. I have owned this car since the mid 80s. I drove it as a daily driver and all of my 3 kids drove it to high school. It is now the worst for ware but still is rust free and it is my very favorite Mustang body of all time. So what should I do with it? I have lots of ideas and can’t decide which way to go. Money is an issue but not the biggest concern.

I want it to be very dependable and absolutely safe to drive. I want to drive it any day, any time for any length of time; to the grocery, to a cruise or across country. I also want to take it to a show and draw attention so I can meet new folks and talk cars. Here are my thoughts.

The first is to fix the minor dents, align all the body panels and put a non gloss black primer style paint on it. I would also clean up the interior and keep the late 80s Mustang seats that are in it. Under the hood I would stay with the 289 but add a new manifold and headers. The rest of the mechanicals would just be refreshed as necessary.

The car would sit just as it does today, lowered 2″ all around. The tires and wheels would be vintage 15″ steel 68/69 Mustang sport wheels with center caps only and BFG tires.

This would essentially be a low buck Rat Rod Mustang. It would be fun but nothing outstanding but I wouldn’t have to worry about chipping the paint or ripping a seat or getting the carpet dirty. Just drive it, wash it and keep on going.

The second option would be much more expensive. I love the old Trans Am cars of the 60s and 70s. One of my favorites was the 1969 red white and black Boss 302 that Parnelli Jones and George Folmer drove. 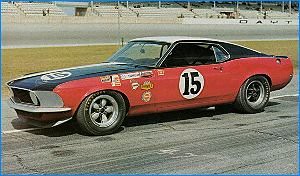 I would start with putting a 428 CJ or a new Ford Crate Boss 302 under the hood and a C6 or 700R behind it. However with $4 gas ever possible I would also consider a late model fuel injected engine with overdrive transmission. I would use coil over shocks and springs up front with power rack and pinion steering; in the rear would be a four link set up. The engine compartment would also house a March serpentine belt system and Vintage Air. The interior would be a modern very comfortable interior for long drives.

The exterior would be just like the race car red sides, black hood and deck and white stripe/top and a white C stripe on the side. However, my C strip would be like the 68 Mustang except it would say Boss 428 at the rear fender vents. 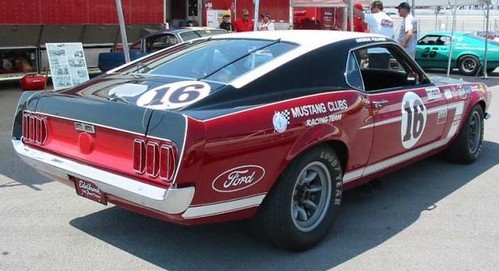 The underside would be completely undercoated for long life in any weather. The tires and wheels would be 16′ or 17′ original style torque thrusts with BFG tires. The entire car would be lowered at least 2″.

Another approach is to go with a full on Shelby GT 350/500 body kit but with a custom paint job; I think maybe a dark maroon with gold stripes. The interior would be kept original in style but greatly updated with new gauges and enriched surfaces. It would be a light beige leather. You would know it was Mustang but the quality of materials would be more like a Lincoln. Tires and wheels would again be 16/17 inch with traditional Shelby style and appearance.

Yet another approach is to stay pure to the 67/68 fastback body style but clean it up. No scopes and no wings or spoilers. The vents on the rear sail panel would be filled in and smoothed out, the bumpers would be removed or body colored. Chrome trim would be at a minimum. The car would have an air bag suspension and sit low to the ground. The interior would be completely modern in also in a light beige leather. The paint would be a solid color, likely a champagne silver of some sort.

I am open to other ideas; let’s hear from you. What do you think? Leave a comment below.